CATMEDIA Entertainment’s has announced that the official release date of their first full-length feature film, Apocalypse Island, will be on June 11, 2019. The film will be available on DVD or for digital rent and purchase. You can already pre-order the DVD on Amazon, Walmart, and Bestbuy now.

Since 2018, CATMEDIA has worked with Summer Hill Entertainment to facilitate distribution and announced early this year that an agreement was made with Wild Eye Releasing for the North American market (which includes the US and Canada).

WHAT IS THE MOVIE ABOUT?

Apocalypse Island is a drama surrounding a cult hidden away in the island marshes of the Deep South. It follows Cam, the Pastor’s son, as he seeks to save his sister’s life from a mysterious affliction. In the end, he discovers the true nature of the island he calls home, that of his father, and how unreliable the mind and memory truly are. 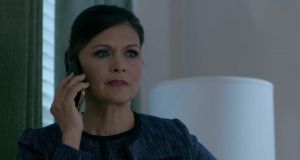 Most noteworthy, the film stars Pretty Little Liars’ actress Nia Peeples as Claudia, one of the film’s most dynamic characters along with a riveting breakout performance by Dean Kostlich in the role of Pastor.

“After 30 years of primetime TV and films running the gamut in terms of budget, name value, and quality, it’s always refreshing to step into a company of filmmakers who are fresh and imaginative, and inspired rather than jilted. The experience of enthusiasm and “dream-making” can be intoxicating. It reminds me of my beginnings.” – Nia Peeples

In addition to being the company’s first narrative feature film, Apocalypse Island is also a woman-produced film.

“Historically, the movie and production business has predominantly been a man’s world. The fact that a small woman-owned company has been able to finance, write, and produce a movie is phenomenal. Not just produce any movie, but produce and score a full-length feature film that we are proud of.”

William Warren, who co-wrote and directed Apocalypse Island, says the story was the culmination of two different ideas he had been working on for some time.

“Years ago I heard a story about scientists who had implanted memories into lab rats, and the idea stuck with me. Years passed and one 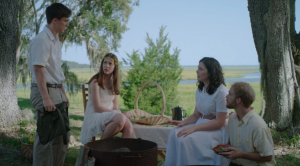 night I was watching TV and a promo came on for a show about a cult on an island. I thought—I can do something like that. So I opened up my laptop, and about 10 months later I had a very rough, very long play typed out. Little did I know that three months later I would be producing it as a movie.”

As a testament to such a booming film industry in Georgia, Apocalypse Island employed mostly local crew and talent. As well as being shot on location within the surrounding Savannah and Atlanta metropolitan areas.

Check out our social media!

DVD and digital sales begin on June 11, 2019. You can already pre-order your DVD copy on Amazon, Walmart, and Bestbuy.